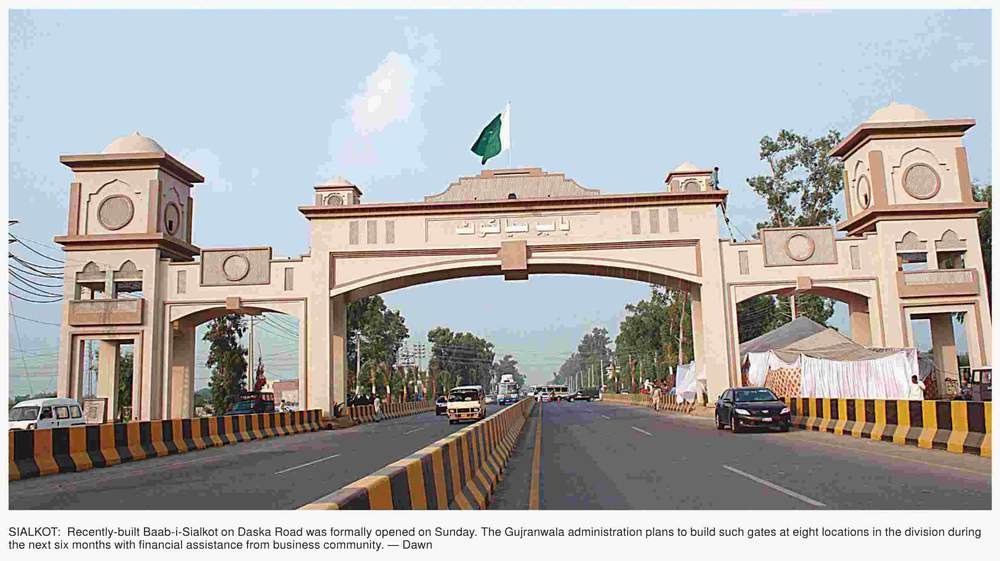 Sialkot became a part of the Muslim Sultanate of Delhi when the Afghan noble Sultan Shahab-ud-Din Muhammad Ghauriconquered Punjab in 1185. He was unable to conquer Lahore but left a garrison in Sialkot. Later Sultan Khusro Malik tried to capture the city but failed to do so. Sialkot then became a part of the Muslim Mughal Empire. The Mughal commander Usman Ghani Raza, advanced towards Delhi by way of Sialkot which capitulated to his armies.

29th December: We dismounted at Sialkot. If one enters Hindustan the Jats and Gujjars always pour down in countless hordes from hill and plain for loot of bullocks and buffalo. These ill-omened peoples are senseless oppressors. Previously, their deeds did not concern us because the territory was an enemy's. But they did the same senseless deeds after we had captured it. When we reached Sialkot, they swooped on the poor and needy folk who were coming out of the town to our camp and stripped them bare. I had the witless brigands apprehended, and ordered a few of them to be cut to pieces.

At the end of the Mughal dynasty the suburbs and the outlying districts and areas of Sialkot were left to themselves. Sialkot itself was appropriated by powerful families of Pashtuns from Multan, Afghanistan and Swat, the Kakayzai and Sherwani, and another family from Quetta. In 1748 the four districts of Sialkot, Sambrial, Pasrur and Daska were given to the Afghan Pashtun ruler Ahmed Shah Durrani and the area was amalgamated into the Afghan empire. After 1751 Ahmed Shah Durrani left his son Taimur to rule Lahore and the surrounding districts. During that time Raja Ranjit Deo of Jammu expanded his dominion over the peripheral areas but not the city of Sialkot. After the decline of the Mughal Empire, the Sikh invaded and occupied Sialkot for about 40 years, though it was held by a Pashtun clan for some time during the decline of the Durrani regime.

The predominantly Muslim population supported Muslim League and the Pakistan Movement. After independence in 1947 the Hindu and Sikh minorities migrated to India, while Muslim refugees from India settled in the Sialkot district and married into the local population. Sialkot has become one of the major industrial centres of Pakistan.

During the Indo-Pakistani war of 1965, when Pakistani troops arrived in Kashmir, the Indian Army counterattacked in the Sialkot Sector. The Pakistan Army successfully defended the city and the people of Sialkot came out in full force to support the troops.In 1966 the Government of Pakistan awarded the Hilal-i-Istaqlal to the citizens of Sialkot, Lahore and Sargodha for their courage and bravery. The armoured battles in the Sialkot sector like the Battle of Chawinda were the most intense since the Second World War.

The post-monsoon season from mid-September to mid-November remains hot during the daytime but nights cool down substantially and the low humidity makes the heat more bearable. In the winter from mid-November to March, days are pleasantly mild to warm and occasionally heavy rainfalls occur from the passage of frontal cloudbands. The temperature during winter may drop to 0 °C or 32 °F, but maxima are very rarely less than 15 °C or 59 °F.

Sialkot is the world's largest producer of hand-sewed footballs, with local factories manufacturing 40~60 million footballs a year, amounting to roughly 70% of world production. There is a well-applied child labour ban, the Atlanta Agreement, in the industry since a 1997 outcry.

During the colonial era British India's first bagpipe works opened in the city, today there are 20 pipe bands in the city.

The 2014 FIFA World Cup's soccer balls were made by a Sialkot company.

Sialkot’s airport, funded by local businesses, is the only private one in Pakistan.